The Shawl is the story of Juanita, a street child who spent her days earning a few pesos running messages for merchants in the market. Then one day Juanita met Doña Rosa, whose wondrous shawl hid secrets of the ancient aztecs in its woven patterns. Juanita, however, soon found that ancient secrets can lead to great adventures but grave dangers.

An excerpt from The Shawl:

“In the meantime, it is best not to go back again. I do not know the pale man you speak of, but I have seen him at the market with Gomez. Gomez is an evil man. He is too clever for the police though. Once before they thought he had smuggled Aztec art to other countries but could not prove it. You must not go to the tunnel again Huanita. Those men are dangerous.”

After dinner, in the dim light of a kerosine lantern, Juanita spread the shawl on the table.

She explained to Doña Rosa that it was actually a map, and represented in great detail a tunnel that had been dug into the side of the ancient pyramid. The long, entwined bodies of the snakes formed the main corridor and the motifs of the toads and lizards and birds were all the carved motifs on the entrances to the chambers. 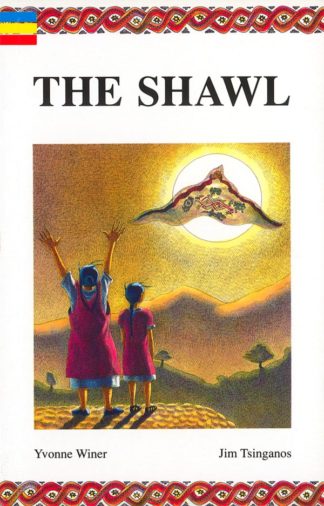 You're viewing: The Shawl $9.95 inc GST
Add to cart
Do NOT follow this link or you will be banned from the site!